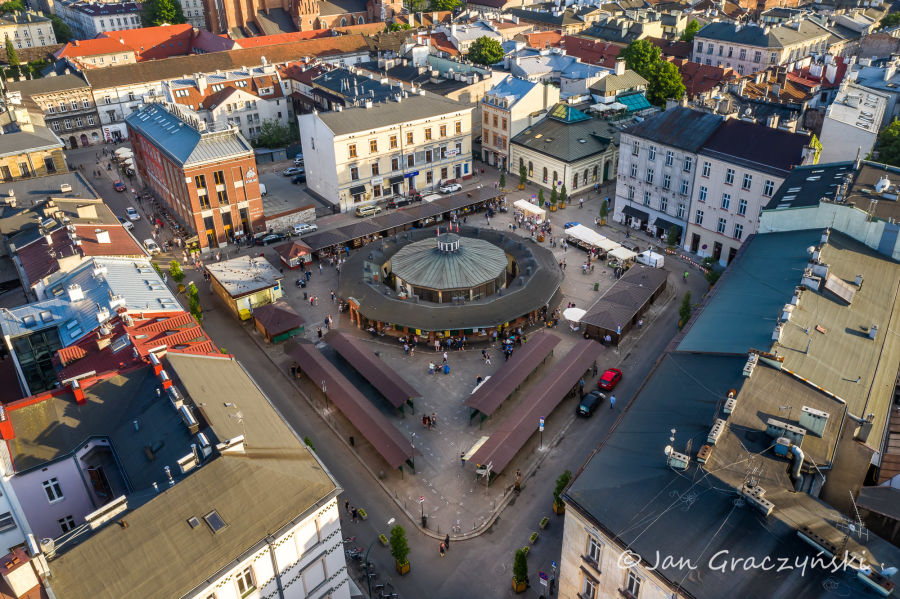 Plac Nowy (eng. The New Square), also called the Jewish Square, is the very heart of Kazimierz district. Surrounded by the Nowa, Beera Meiselsa, Warszauera and Estery streets, it is one of the most original marketplaces of Poland.

On the north side of the square, extending along defensive walls of Kazimierz, there are the houses once belonged to the Jewish hospital near the Kupa Synagogue From the end of 16th to the mid 19th century, the area of Plac Nowy was the part of Jewish town, called Libuszhof. This is where the paths of the inhabitants of Kazimierz used to cross. Today's constructions around the square took shape mostly in the years 1870-1923 and from the 1900 this area has been serving as a marketplace.

The central point of Plac Nowy is the Okrąglak (Rotunda) with the hole-in-the-wall food hatches. Okrąglak was built in 1900 as a market hall. In 1927 the building was leased to Jewish Community and it was transformed into a ritual poultry slaughterhouse, which was liquidated only during the German occupation. After the World War II, the Okrąglak again started to serve as a market hall. Currently, in its walls there are fast food windows located. This is exactly where you can taste the best 'zapiekanki' in the whole Kraków. Being of enormous size, they are really unmatched. If you do not believe, you can just look at the endless queue of hungry people waiting to get them. But it is worth to wait! Plac Nowy is the place where yearly concerts of Krakow Jewish Festival take place – and they are performed on the Okrąglak's roof. In 2008, the building was entered into the register of historical monuments of Kraków.

From early morning hours in Plac Nowy merchant stalls offer a variety of goods, including fresh vegetables, food and industrial products. On every Saturday a flea market takes place there, which attracts collectors from the whole Poland as everyone can find various precious antiquities (like old books and jewellery). In addition, on Sundays for the past few decades a clothing market has been carried out there. It is a great opportunity to search out an original second-hand outfit and do not lose a fortune. The square of Plac Nowy is surrounded by numerous lovely bars and cafes which allude to the magical atmosphere of old Kazimierz.