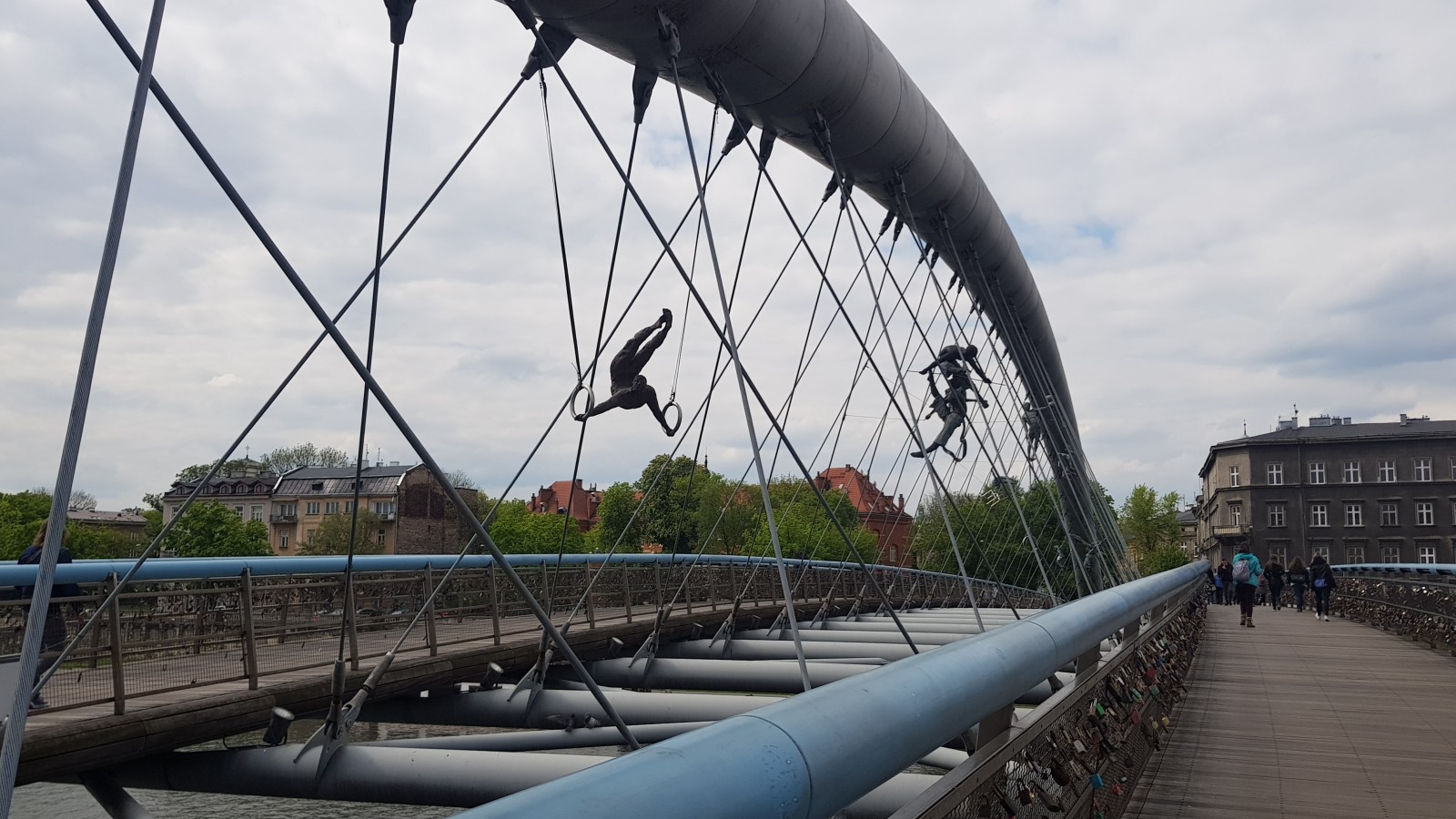 It is pretty new facility as it was delivered on 30 September 2010, being built on the site of former Most Podgórski (eng. Podgórski Bridge). Kładka Bernatka was named after father Laetus Bernatek - a monk, who at the turn of 19th and 20th centuries contributed to building the Hospital Order of Hospitalliers of St. John Grande in Kraków (pl. Szpital Bonifratrów). The bridge has a structure of 145-metre steel arch, to which two platforms are suspended (one for pedestrians, another for cyclists).

The whole construction weighs over 700 tonnes. Creation of this footbridge has strongly contributed to a cultural, social and touristic recovery of nearby streets on both sides of Wisła River and adjacent parts of the Wisła Boulevards. The most common destinations of the walkers are Rynek Podgórski (eng. Market Square of Podgórze district) and Park Bednarskiego in Pogórze, and Wolnica Square on the side of Kazimierz district.

Kładka Bernatka became another 'bridge of love', being inspired by other famous European Pont des Arts bridge in Paris as well as Polish bridges Most Tumski in Wrocław or Most Poniatowskiego in Warszawa. The idea is that lovers lock on the bridge railing a padlock which has the names or initials, a message of love and the date engraved on it. After that, they throw the key into the water as a sign that their feelings will never change. In this way, Kraków's 'Lovers Bridge' is loaded with hundreds of padlocks on both its sides. Here and there can be seen some destroyed parts of the railing, which presumably is a result of a bold attempt to remove an 'outdated padlock'. Unfortunately, actions like this are the main reason for poor condition of the railings. To repair them, all the padlocks need to be removed. Most certainly these proof of love can't be thrown out, since they are so meaningful for their owners. However, some new ideas come up to create a monument of love, which would be made entirely of the deleted padlocks.

Strolling through the bridge, there's no way not to look up, where the magnificent sculptures designed by Polish artist Jerzy Kędziora can be admired. The exhibition, which has been presented since the autumn 2016, is called 'Between the water and the sky'. Hanging on the ropes, the statues of nine acrobats dangle over the bridge, adding to its charm and making you feel like you were in some theatre. But the delights of this place don't stop here. The bridge offers a panorama of Kraków as well as Wisła River view, and its neighbourhood is rich in welcoming pubs and restaurants on both Kazimierz and Podgórze sides. On the south-east of the footbridge there is a monument of Juliusz Leo – the mayor of Kraków in the years 1907-1915 and an important figure of the city. Kładka Bernatka takes on a special character only after dark, when, highlighted from below, it creates a unique spot and one of the most photogenic object in the area. 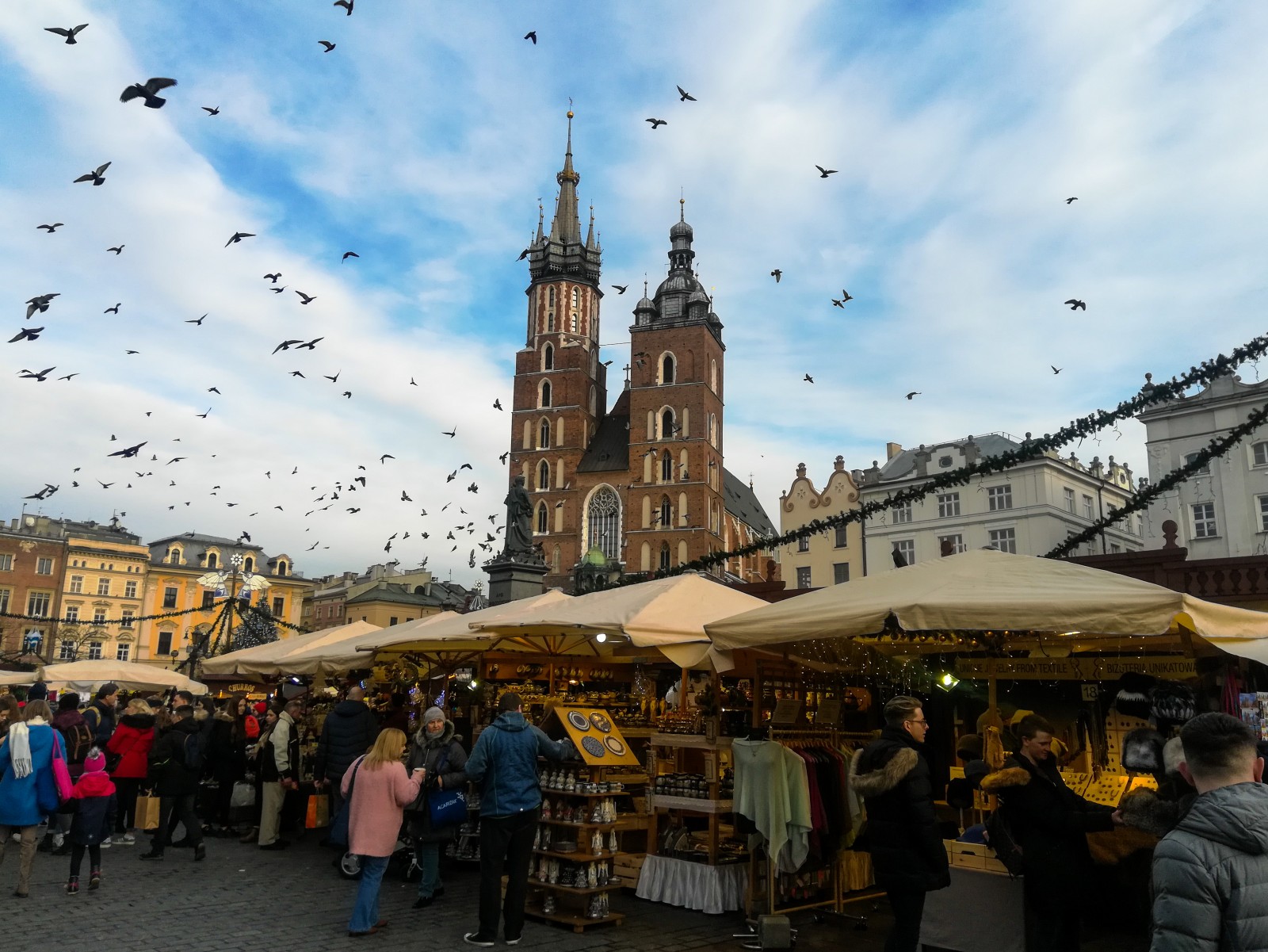 Located on the Main Market Square in the Old Town, Krakow Christmas Fair is one of the greatest attractions of winter season in Krakow.

Krakow Christmas Market is an annual, over a 100-year tradition. From the last week of November the square is decorated with hundreds of fairy lights and a massive Christmas tree. Then, half of the Main Square is filled with several dozen (around 80) wooden stalls which offers a variety of unique, regional products. The first category of goods pose handmade Christmas decorations, including hand-painted baubles, wreaths, wax candles and frosted gingerbread men. Availability of cheap antiques and jewellery as well as wooden, porcelain and ceramic articles makes this place a perfect destination to find Christmas gifts! Christmas Market is the only opportunity to try all the regional specialities in one place. The offer includes dumplings (pierogi), grilled smoked sheep cheese (oscypki), a loaf bread with special Polish lard and a pickle, grilled sausages, home-made cakes, multi flavour fudges and nuts roasted in caramel. Along with hot mulled wine with cloves (grzaniec) or honey wine, the proposal seems to be irresistible!