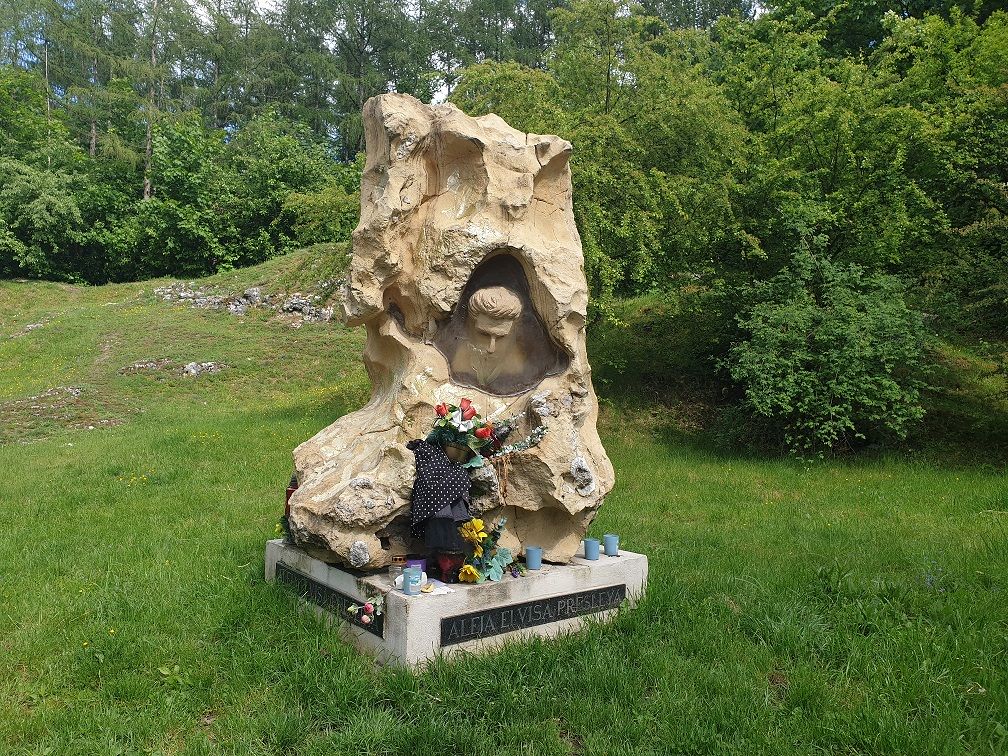 While wandering about Skałki Twardowskiego city park in Zakrzówek district or relaxing by Zakrzówek Lagoon, it is worth to explore a bit more of this area to stumble upon a beautiful monument of Elvis Presley.

Walking down along Pietrusińskiego street towards Skałki, you will soon realize that you find yourself in Elvis Presley Avenue which has existed in Kraków since 2005. It is quite extraordinary, since Kraków is the only place apart from Memphis with the Elvis Avenue like that. Being 300 metres long, the alley leads to the spot where the monument devoted to the Rock'n'Roll king is located.

Revealed on June 2005 on the Music Days of Kraków, the statue was erected to commemorate the life of the legend. However, the location for it was not chosen at random. Skałki Twardowskiego is where Polish fans of Elvis used to gather in the 70. The initiative of renaming the avenue after Elvis Presley was undertaken by various organisations, such as Polish Association of Extracurricular Interests, Royal Elvis Club 'Good Luck Charm' and Organizing Committee 'Elvis Presley's Avenue'. It was believed that the talent of the King needs to be remembered and his attributes, such as hard work, selflessness and kindness towards people should serve as a role model. On every anniversary of his death, Presley's fans continue to meet by the statue to recall his legend and perform his songs.

Elvis Presley is the icon of popular culture and the owner of one of the most recognizable voices of all time. The King of Rock'n'Roll is famous for performing country music, rhythm and blues as well as gospel for which he won three Grammy Awards. His romantic ballads rapidly won hearts and minds of audience all over the world.

The Rock'n'Roll king died on August 16, 1977 at his mansion in Memphis, being only 42. In the last years of his life, Presley suffered from depression, was resigned and discouraged from music. He was increasingly getting fat and used to abuse his organism by taking alternately sleeping pills and stimulating drugs. The direct reason for the death of Elvis was a cardiac arrest. To this day the residence of the King remains a destination of people who keep believing that Elvis Presley is still alive

The Grunwald Monument [Polish: Pomnik Grunwaldzki] is an equestrian statue of the king Władysław II Jagiełło, erected in 1910 according to the project by Antoni Wiwulski and Franciszek Black. Placed on Jan Matejko Square in Kraków, it commemorates the 500th anniversary of the Battle of Grunwald in 1410.

The memorial was founded by the distinguished Polish pianist and future Prime Minister of Poland Ignacy Jan Paderewski, who established it 'for the glory of our forefathers and for brothers for courage' [Polish: 'Praojcom na chwałę braciom na otuchę] which has been engraved on the pedestal. Unfortunately, the Grunwald Monument was demolished in 1939 by Germans, and reconstructed only in 1976, following the design of Marian Konieczny. In front of the statue there is the Tomb of the Unknown Soldier.

On the day of 15 July 1410, on the plains nearby Grunwald village, one of the largest and bloodiest battles in the history of medieval Europe was fought. The allied Polish and Lithuanian forces, which were commanded by the king of Poland Władysław II Jagiełło and the Grand Duke of Lithuania Vytautas, defeated the Teutonic Knights and German chivalry that was united with them. It was a total victory - the power of State of the Teutonic Order was broken and the Jagiełło dynasty was raised to the rank of the most important dynasties in Europe. For these reasons, the Battle of Grunwald is considered to be the most important triumph of Poland in her long and proud history.

The top of the 24-metre memorial is crowned with the statue of the king Władysław Jagiełło on his horse. In his right hand the king holds a naked sword. On the front wall there is a figure of Lithuanian duke Vytautas, who was Jagiełło's cousin, Underneath, dead Grand Master of the Teutonic Knights Urlich von Jungingen lies at duke's feet. The east side of the monument presents Polish knights who pick up Teutonic banners from the ground. On the west side, there is a Lithuanian warrior blowing his horn and holding a tied up Teutonic captive. Finally, the back wall of the monument features a Polish peasant who is breaking down his chains as a symbol of victory.

The construction of the memorial took place in the conspiracy, since Kraków was then the part of Austrian partition. At that time, Polish country didn't exist on the map of the world. It can therefore be said that the Grunwald Monument was created ''to lift up the hearts'' of Polish nation. The statue was solemnly revealed on July 15, 1910 at high noon. The ceremony was attended by 150,000 visitors as well as a great number of Kraków's citizens and the speeches were delivered i.a. by the mayor of Kraków Juliusz Leo and the founder of the monument Ignacy Jan Paderewski.

Due to its historical dimension and national importance, the Grunwald Monument was gradually being destroyed during the World War II. Eventually, in 1945 it was blown up with dynamite by the retreating Nazis and the dismantled figures were transported to Germany. Over the following years its place was empty and only on 6 October 1976 the Grunwald Monument was recreated in its former location. Fortunately, because in 2010 Poland was able to celebrate there the next round anniversary of the battle and 100th anniversary of the monument's foundation. Located right behind the Barbican and near Academy of Fine Arts, the monument stands as a symbol of struggle for Polish statehood and another must see position on the map of Kraków.