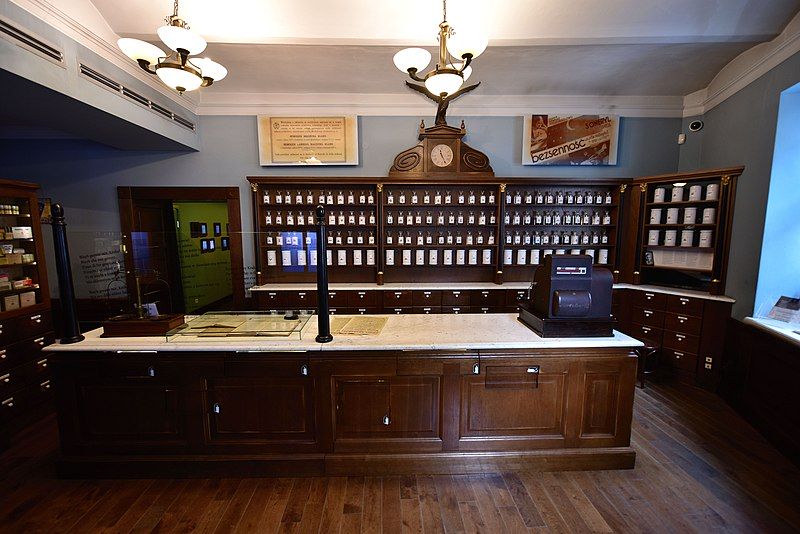 Between 1941 and 1943 on the area of Podgórze district existed a ghetto for Kraków Jews, set up by Germans to accumulate all Jewish people in one place.

By March 20, 1941 3,500 of non-Jewish, called 'Aryans' were forced to leave their homes and move to other parts of Kraków. In their place, 16,000 of Jews were transferred to the area between the Vistula River, Podgórze Place, Krzemionki and the Kraków-Płaszów railway line. Also Jewish institutions, such as the Judenrat, the Jewish self-help, the Jewish hospital, the orphanages and nursing homes were moved to the Jewish quarter. The ghetto area was enclosed by 3-metre walls and was guarded by German police (from the outside) and Jewish police (from the inside). There was only one tram line number 3 which ran through the ghetto but with no stops on the way. This area was destined to be cut off from the rest of the world.

The Eagle Pharmacy, established by Józef Pankiewicz in 1909 in the house number 182, found itself within the ghetto's boundaries. Józef's son Tadeusz Pankiewicz, who run the pharmacy from 1934, got official permit from Germans to keep his pharmacy open, which was unique in the occupied Europe. He managed to convince the authorities that his pharmacy is the only one in ghetto and it needs to be open in case of an epidemic. In this way Pankiewicz became the only non-Jewish person allowed to live permanently on Jewish territory.

During the war, the pharmacy provided shelter and help to the people leaving in ghetto. From the beginning of ghetto's existence, it was a secret meeting place for ghetto's elite which commented on war announcements, read the underground press and held political discussions. The eagle pharmacy was a place of communication with the Aryan world. They smuggled here money, letters and information. Naturally it would be impossible if not the support from the pharmacy's staff – Tadeusz Pankiewicz and his co-workers, such as Irena Droździkowska, Helena Krywaniuk, Aurelia Danek-Czort, who actively participated in helping Jews locked in the ghetto.

Plac Zgody, currently under the name Bohaterów Getta Square, was the main spot of deportations for Jews from Kraków Ghetto. Pankiewicz and his personnel were the eye-witnesses of these violent events. Being aware that the Jews chosen for deportations ended up in death camps, they tried to help them through hiding them in the pharmacy. It was possible thanks to the back door, officially allowed only for staff members. For those who could not have been rescued, the pharmacy was the last point of contact, where they could leave a goodbye message for their families.

Pankiewicz was on duty in his pharmacy for the full period of ghetto's existence – continuously for 2,5 years. His memories from those times was published in the book 'Apteka w getcie krakowskim' (eng.The Pharmacy in the Kraków Ghetto), which is an eyewitness account of Kraków Jews' Holocaust. In 1983 Israel honoured Tadeusz Pankiewicz with the Righteous Among the Nations Medal. Mgr Tadeusz Pankiewicz died on November 5, 1993 and was buried on Rakowicki Cemetery in Kraków.

Since April 22, 1983 the premises of the former Eagle Pharmacy at 18 Bohaterów Getta Square has housed a National Memorial Museum devoted to history of Holocaust of Kraków Jews and Tadeusz Pankiewicz. In 2002 the film director Roman Polański gave the money he received for winning Golden Sceptre Award of the Polish Culture Foundation to the Eagle Pharmacy. The exhibition Tadeusz Pankiewicz's Pharmacy in the Kraków Ghetto consists of 6 sections presented in the former pharmacy rooms, equipped with reconstructed furniture and vessels. This display takes you back in time to show the reality of Jewish people's existence during the war.